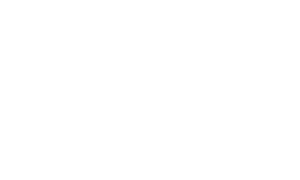 Stay Here Move According To Region

With RealSAM Pocket, you can make calls, communicate with messages, listen to books or other media and get assistance just by using your voice. No need to learn complicated touch screens, look for the apps that are hiding on a screen, or struggle with reading small buttons; just tap on the screen and talk.

All you have to do is tap on the screen and speak what you want the device to do, using natural speech.

Stream books from 4 libraries, 1000’s of podcasts and radio stations, and The Conversation newspaper at no extra cost.

Try RealSAM Pocket for up to 30 days with full access to customer support. If you decide it's not for you, we offer a no hassle return.

What's in the box?

Everything is setup. All you need is to insert a SIM card or connect your RealSAM Pocket to WiFi.

A bumper case with a lanyard and a screen protector attached to the screen to keep your phone safe and always at hand.

A small tool you'll need to open the slot and insert a SIM card from your preferred provider.

No need to learn complicated touch screens, struggle with reading small buttons or looking for apps; just tap on the screen and talk.

Say "Send message to my daughter" or "Send message to 415.111.2233" followed by your message. Say "Listen to my messages" to retrieve your incoming texts. Get notified of new and unread messages.

Snap a picture of text and have it read to you instantaneously using the Optical Character Recognition (OCR) technology. The best part, RealSAM Pocket can also read the handwritten text.

Say "Open Magnifier," take a picture of the text, people or the environment. Use handy magnification, contrast or color options to enhance the image.

Snap a photo of your environment and hear a description of what's around you. You'll hear things like "chairs, desks, computer, computer accessories, people, office, couch...etc"

Say "Be My Eyes" and get connected to a sighted volunteer who can provide help with grocery shopping, home organization, navigation and much more.

Say "Remind me to turn off the oven in 40 min," or "Remind me to call Vicki in 3 hours." RealSAM Pocket will sound an alarm when the time comes and remind you several times unless you cancel.

Stream thousands of books from Librivox, Calibre Audio, Project Gutenberg and Torch Trust instantaneously or add them to your bookshelf. Access hundreds of podcasts, The Conversation newspaper and a multitud of radio stations.

Get a free demo of the RealSAM Pocket

Depending on your location, we may offer in-person or virtual demonstration. 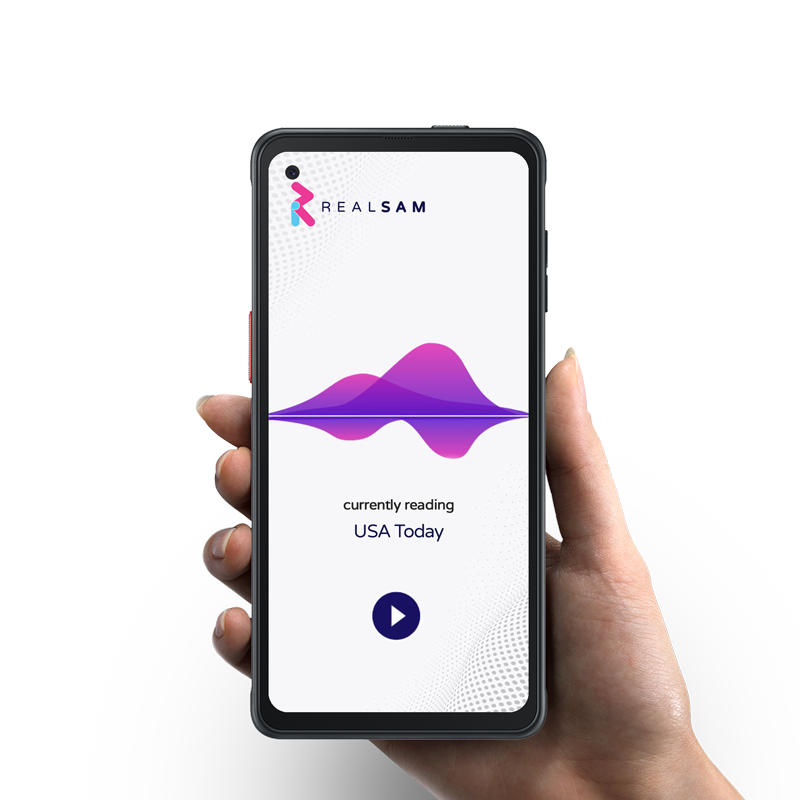 Testing this product, I found the Tap and Speak protocol for controlling RealSam Pocket was easy to adapt to and worked smoothly.

I have spoiled some of my husband’s stories, because now I get the same articles that he reads.

The single button and voice controls are impressive and simple to use.

Below are some frequently asked question and answers to these questions. 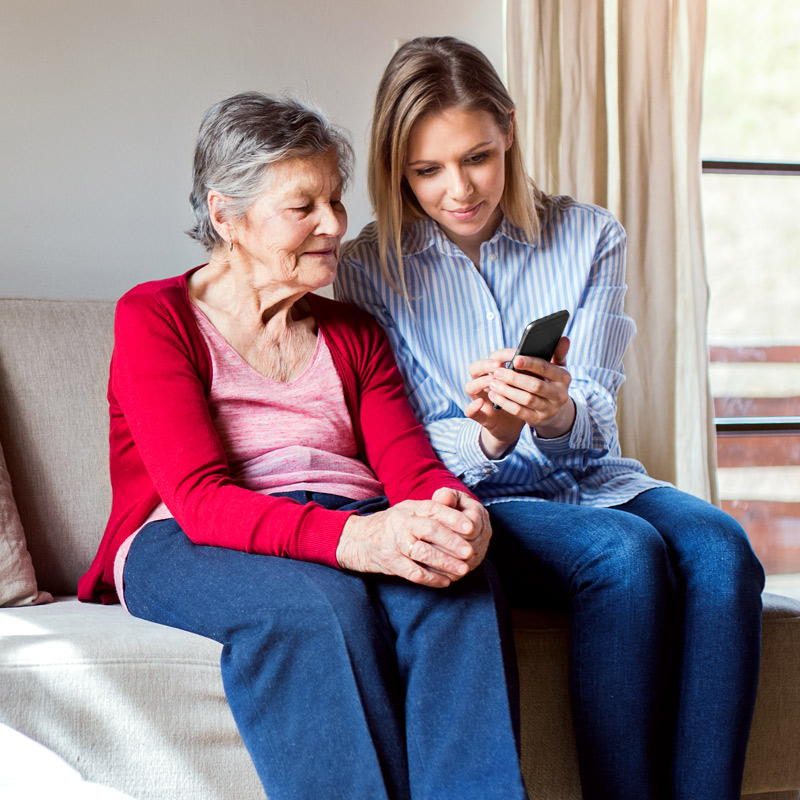 RealSAM Pocket is a voice-operated smart assistive device that is designed to be simple to use and of enormous value to people living with low vision and blindness. We install our software on a Samsung mobile phone, and it completely takes over the phone. More than just a phone for the blind, you can use your voice to make phones calls, search for and stream audio books, read today’s newspapers, get navigation or sight assistance and much, much more.

What are the parts of RealSAM Pocket?

RealSAM Pocket is actually a collection of smart technologies. It is:

The handset that controls basic functions such as speech to text conversion, media playing and making calls. It runs on an Android phone, but the user can’t access Android directly.

A network connection via Wifi or a mobile service provider.

A proprietary Artificial Intelligence engine on the internet, called the Real Dialogue Engine, that figures out what users want by interpreting the user's intent and not just the words and responds intelligently to the user's requests.

A variety of sources of content on the internet including Librivox library, Calibre Audio, Project Gutenderg, Touch Trust Library, Internet Radio, The Conversation newspapers and a variety of podcast sources.

A web portal that allows users, family, friends and care takers to update some parts of the device.

Why isn’t Pocket an App?

Though easy to use, RealSAM Pocket has a very complex Dialogue engine that powers the device. The RealSAM Pocket experience would be hobbled in a variety of ways which would frustrate users. Such as having to login regularly.  We would also have to utilize other software attempting to listen in on your conversations with the RealSAM Pocket.

Why can’t you put RealSAM Pocket on my phone?

We probably could, but it wouldn’t be viable for you as it generally takes us a minimum of two to four weeks work to get RealSAM Pocket working seamlessly on a new phone.  It would be expensive!

Should I wait for the next version?

All users get all the updates, so no one ever misses out on features. Also we only change handsets every couple of years because we can’t purchase the old handset anymore. So there’s no need to wait when you can start using it right away.

We have worked with our partners to deliver our innovative and life-changing products. Their continued support has been vital to our success.

Connect With Us On Social Media